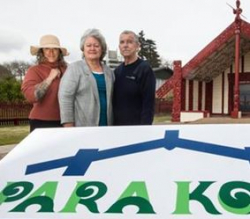 A Rotorua marae has banned fizzy drinks and plastic bottles - a move a health professional has described as ''trailblazing''.

The chairwoman of Ohinemutu's Tūnohopū Marae, Norma Sturley, said all 20 trustees were involved in the decision gradually introduced over winter to ban soft drinks and plastic bottles (not just single-use), both large and small.

"Also the number of plastic bottles collected over a period of time was phenomenal and we realised it couldn't be any good for the environment when disposing of them."

Sturley said they had received great feedback from those outside the area who were looking at talking with their own marae committees.

"Everyone who has used the marae since ... has gotten on board and supported the kaupapa."
Sturley was not aware of any similar bans at other marae.

She hopes it will "initially effect generational change".

"Ideally, our whānau, children, and mokopuna will grow up in a loving environment, and never see a plastic bottle or drink a fizzy drink that is terribly bad for our health anyway."

Rupapera also hoped sustainability would become part of the makeup of marae, just like "doing the dishes and playing bullrush".

Arish Naresh, chairman of the NZ Dental and Oral Health Therapists Association, described the decision as fantastic and said he hoped other marae around the country would go down the same track.

"We see a high amount of decay in people aged between 0 and 18 and unfortunately Māori and Pacific Islanders are over-represented in this group," Naresh said.

"When marae leaders take these steps, it's not only seen as trailblazing but also hopefully sets a precedent for other marae to follow."

Waiariki MP Tamati Coffey said the ban was recognition that marae were stepping up and playing their part in choosing healthier options for whanau and looking after the environment at the same time.

"This sends a strong message to other marae to follow and, done right, may lead to a normalisation of how we look at plastic and sugar," Coffey said.

"I challenge all marae to look at how they can reduce their environmental footprint and choose healthier options."

Toi Te Ora medical officer of health Dr Phil Shoemack said the marae's decision was a good one and hoped other decision-makers would be as bold.

"Sugar has no nutritional value at all so therefore should have no part in our nutrition," Shoemack said.

"As well as being empty calories, sugar is highly detrimental to teeth and, in particular, children's teeth."

"Getting rid of sugar won't solve our oral health problems nor our obesity ones [to do that will require a number of things] but it is a great start and we have to start somewhere."

Ōhinemutu resident Lani Kereopa had also been helping introduce the ban, which she said was a "fantastic step taken by the marae towards improving the health and wellbeing of the hapū".

She said the marae had returned to the practice of providing water in jugs since the ban had been introduced.