Initiative for pregnant women to be rolled out around region 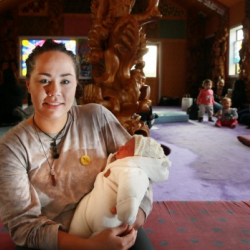 An initiative for pregnant Waikato women, believed to be the first of its kind in the country, now has a role of more than 200 women.

Hapū Wananga was launched last year and mirrors that of a programme in Finland where mothers are provided education on a range of issues as well as starter packs of clothes, sheets, toys and a bed for their baby. The programme has been so successful that it will now be implemented in other district health boards in the Midlands region. The initiative is based on kaupapa Māori principles and wananga (classes) are held at the Fairfield College marae over two days. Hapū Wananga was launched by the Waikato District Health Board's Māori health service, Te Puna Oranga.
It was also being used to get women to quit smoking, as 40 percent of pregnant Maori women within the Waikato smoke.

Kelly Spriggs facilitates the class and said she has 218 Māori women registered for the wananga, which is booked out until March. She said the largest numbers of high-risk Māori will be attending the wananga and although the programme is based on tikanga Māori, all ethnicities are welcome. "The wananga is all about empowering women the whole way through their pregnancy, at their birth and through [parenthood]. We also educate them on [safe sleep], breastfeeding and traditional birthing, among other things," Spriggs said. At the moment, there is only enough funding for classes to be held fortnightly, but Spriggs said there was easily enough demand to run a wananga every weekend.

Bailey Helmhout-Crown attended one of the classes when pregnant with her now two-month-old son, Te Kapua-Iti Doorbar. The 25-year-old mother of two said the wananga emphasised tikanga Māori, a link she thought was important for young mothers. She also enjoyed the breastfeeding module, run by lactation consultant Alys Brown. "I feel like breastfeeding is quite an empowering thing for all women, but Māori women especially," Helmhout-Crown said. Brown said they are working on holding an outpatient lactation service in the community across Waikato - which would follow up women from the Hapū Wananga classes.

Te Puna Oranga acting director Millie Berryman said the wananga has seen a significant increase in young Māori women attending antenatal classes.
"I believe the success of the hapū wananga is through the facilitation of this programme and the range of information, people and products that the hapū wāhine can access during this time. "They receive information, presentations from guest speakers, links to providers and answers to their questions in a language that they can engage with. They also receive a dressed peepi pod, an incentive pack, muka, rongoa, clay to create their own ipu whenua and, of course, kai."

Berryman said 78 percent of women who attend classes are Māori, 17 percent are 14 to 19 years old, 46 percent are 20 to 25 and 38 percent are over 26. "The non-clinical venue is appealing to the wāhine and their whānau. Non-Māori wāhine and wāhine from out of Waikato have also attended these classes, with great feedback," Berryman said.
Recently, the Hapū Wananga Curriculum was launched to Midland Region representatives at the Fairfield College Marae. It was based on the Waikato classes with input from Midlands to the design and content. "The curriculum is a guideline for educators and midwives to easily translate information to wāhine Māori, with a vision to increasing the number of Māori accessing antenatal education incorporating tikanga, culture and values."