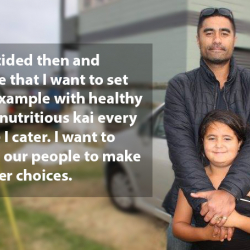 A Rotorua chef is changing the way he caters on marae in an effort to improve the health of Maori.

Jermaine Webby (Ngati Whakaue, Tuhourangi ki Tarawera) has been catering for tangihanga, hui, and private functions at local marae for over 10 years, and says marae need to be setting examples for Maori in what they should be eating.

He says this means more fresh fruit and vegetables and less sugary foods and drinks.

“The biggest issue for most marae though is the price of healthy kai. How healthy the meals are depends on the cook, the client, and how much money they have to work with and as we all know, the things that are good for you aren’t the cheapest options to be buying.”

Jermaine says he was shocked however when catering for an aunt’s tangi recently to find that the food bill, when making simple healthy changes, ended up being cheaper than normal.

“My Aunty Tuhipo Kereopa was a change maker and she and her family are very health conscious so I knew she would have wanted the meals we served at her tangi to be nutritious and to set an example.”

“The standout changes we made were bottled water and fruit on the tables as opposed to soft drinks and bowls of sweets, and we also aimed to get five plus vegetables on the plate as opposed to having two meats and three vegetables. Our people were once gardeners and traditionally we would have eaten mostly vegetables.”

“It ended up being cheaper because I didn’t have to buy as much meat, and being summer, I had a lot of fresh fruit and veges in season which were a lot cheaper than usual. The water was cheaper than the fizzies too.”

He says a family member had also given a large koha of nectarines and apricots towards the tangi.

Jermaine says it was a ‘big change’ from what he was used to doing and seeing in the kitchen at marae, and he was pleasantly surprised to hear the feedback was mostly positive.

“I was told that a lot of the kaumatua in particular were very impressed, with some saying they were going to do the same thing at their own marae. People were obviously surprised to see fruit and water on the tables and not everyone was happy, but the majority were accepting and open to the changes.”

“I decided then and there that I want to set an example with healthy and nutritious kai every time I cater. I want to help our people to make better choices.”

“This includes providing ‘healthy kai only’ within our organisations, at h

ui, and at all tribal events.”

She says Healthy Families Rotorua is keen to work with local Maori leaders, groups and organisations to find ways to address issues such as the cost of

“For example, we are interested in working with multiple partners to look at sourcing fresh fruit and veges from community gardens and local food growers to make it cheaper for marae.”