How do whānau become smokefree?

Quitting smoking can be very difficult.  It can be made even harder if there are whānau members who smoke around those who are trying to quit.   Quitting smoking for good is easier when you support and encourage one another to be auahi kore.  The good news is there's lots of tools and support available to help you to become smokefree and live a healthy life.

How can whānau get local support to quit smoking?

Local smoking cessation support providers are available to provide quit smoking help and supportive advice. They can also provide Nicotine Replacement Therapy if required.  Below are the Stop Smoking Service Providers in the Bay of Plenty, Lakes, and Tairāwhiti districts that you can contact for stop smoking support.

Western and Eastern Bay of Plenty Pinnacle Midland Health Stop Smoking Service - Once and For All.

Alternatively, if you or your whānau need help to quit smoking find support at:

How can whānau or hapū prevent tamariki from starting to smoke?

Most whānau don’t want their tamariki to smoke, even if they smoke themselves!  Whānau can do plenty of things to prevent tamariki from taking up smoking. How can we support whānau to be smokefree?

Whānau can support each other to become smokefree by doing the following:

How can we make our marae smokefree?

Making your marae auahi kore can make a huge difference in your hapū as well as your whānau.

Start with your marae committee and marae trustees and table a request to make your marae smokefree. Ensure as many of the hapū as possible participate in the discussion.  If agreement to become auahi kore is approved, implement the Hapū Hauora Marae Auahi Kore Guidelines below. 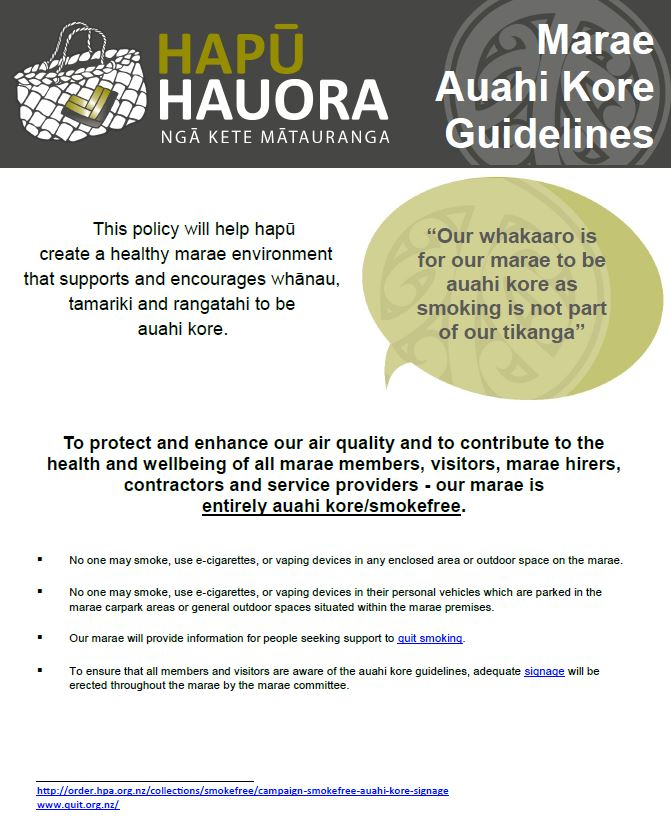 Putting up smokefree signage is important as it will promote your marae's auahi kore stance and hapū members will be reminded of this whenever they see the signs.
Manuhiri will also be aware of the smokefree marae when they come visit or hire it for private events.

Smokefree signange can be ordered from the Health Promotion Agency website.  You can order up to 7 signs FREE of charge.

Hapū members or visitors should have access to quit smoking support or people who can help them to give up.  This list of cessation support providers should be made available to hapū or visitors to the marae and placed on noticeboards or in an area on the wall where they can easily be seen.

How can we make our kainga and waka smokefree?

Be a positive role model and don’t smoke around tamariki at any time. They’ll be less likely to become smokers.

Ask your family and whānau to support you by not smoking in your house and in your car.  You can go one step further and ask them not to smoke at all! If whānau are smoking, keep cigarettes, lighters and reminders like ashtrays safely away from children. Ask whānau to smoke where tamariki won't see them.  Let other people know smoking is not allowed in your house and in your car – put smokefree/auahi kore stickers on your windows to show you mean business!

Smoking in the car is harmful to your tamariki because:

Second-hand smoke is a mix of smoke from the burning end of a cigarette plus the smoke blown into the air by the person smoking. It contains more than 200 poisons, some of which can cause cancer.

Be a positive role model and donʻt smoke around children at any time. Theyʻll be less likely to become smokers.

Quitting smoking can be very difficult.  It can be made even harder if there are whānau members who smoke around those who are trying to quit.

The good news is there are national and local/iwi events that whānau members can take part in which offer support and  encourage one another to be auahi kore.

Stoptober is held in October every year. The aim is to get people to quit smoking for the month of October. The video below explains what Stoptober is all about.

Resources
He Aha Ai Why should we be smokefree? He Aha What is being 'smokefree'? Pehea Ai How do whānau become smokefree?